You are here: Home > Products > Biovital

Mycotoxins have various biological effects that are attributed to the diversity of chemical structures. Their effect can be carcinogenic, mutagenic, teratogenic, estrogenic, neurotoxic and immunotoxic. In livestock production mycotoxins can be a culprit to feed refusal, wasting syndrome, decreased performance, reduced weight gain, immune suppression, reproductive problems and safety issues associated with residues. Due to the broad mode of action of mycotoxins, most of the time they have non-specific symptoms that may interact with other stress factors. Additionally, mycotoxin effects can also be influenced by different factors such as species, age, sex, diet, amount and duration of exposure. This makes diagnosis of mycotoxicosis complicated and unreliable. Many mycotoxigenic fungi can proliferate and produce toxic metabolite at similar conditions. Thus, mycotoxins rarely occur as single contaminants in feed. Feed formulations may also be a blend of different grains and other ingredients. Several mycotoxin combinations can be present in animal feed which cause damaging effect on the productivity of animal. In order to address this challenge, Biovital is designed to provide a broad spectrum action and to answer various biological effects of mycotoxins. 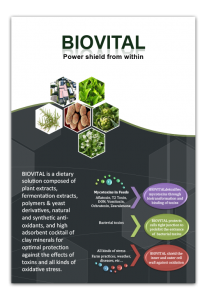 Biovital’s plan of action is to Shield, Support and Stop. Biovital is a dietary solution of selected ingredients that will Shield the animal by adsorption of mycotoxins and will then be excreted. It also contains plant extracts that are known to support the liver and kidneys for easy detoxification and elimination of toxins. By addition of fermentation extracts and yeast derivatives it is able to Support the immune response and bring back the fighting capability of the immune system against pathogens. Naturally, it has a mold inhibitory function not only to Stop mold development during storage but also to increase the palatability of feed.

The occurrence of molds as well as other parameters that may increase the risk of mycotoxin prevalence. Based on our knowledge and risk assessment tools, Neovance can offer you advice to aid you in effective mycotoxin management.